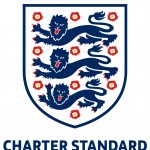 We are delighted to announce that after a concerted effort from all the Club officers, managers and coaches KDFC has been awarded FA Charter Standard Development Club status. There are currently 600 Clubs affiliated to Middlesex County FA of which 120 are Charter Standard Clubs and only 8 are Development Clubs. We hope this award will not only raise our profile within the county but help us develop even more partnerships with groups within the London area, support our applications for funding, attract potential sponsors and secure training and development opportunities for our coaches, managers and players.

More details on the FA Charter Standard Scheme can be found at the link below.

Middlesex County FA believe that it is a fantastic achievement and honour to achieve the FA Charter Standard Development Award and therefore I would like to take this opportunity to congratulate your club on behalf of us all. By achieving the award your club has demonstrated an excellent level of discipline, administration and operating standards with a commitment to developing new activity within the club over the next three seasons.” 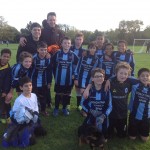 Dragons started sharp playing some very good football and creating a lot of chances. It was good too see things worked on in training coming to life in a game.

Late in the first have Dragons got their rewards, going 1-0 up with a well worked move, finished by Sam.

In the second half Dragons were playing playing the same football but could not take the chances created. Larkspur had started to create chances of their own and late in the second half got the equaliser. With the game finishing 1-1.

This afternoon, Dragons Under 12’s faced Parkfield FC in an excellent league performance. Dragons looked sharp in their warm up and took this into the game. We started with a quick tempo and passed the ball about and won it back quickly when losing possession, this created pressure on the away side. Halfway through the first half Dragons took the lead with a well worked move, passing and moving the ball quickly. At half time in the team talk, it was agreed that the tempo needed to remain the same and we needed to push on to get the second goal. Dragons created a lot of chances through moving the ball quickly and soon got their rewards, the second goal was created through a drill from training which please the coaching staff. Well done boys, a well deserved 2-0 win, same again next week! Thank you to the parents for your support this afternoon. 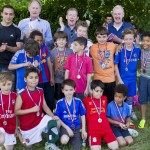 Congratulations again to our current U11s who managed to go the whole season 2013/14 unbeaten in the league and in fact won every match and finished division champions!

We are now looking for players to join an enthusiastic group of U10s and their coach to form a new boys U11’s team to start season 2014/15. If you know any footballers who will be under 11, but over 10, on September 1st 2014 please bring them along to training every Saturday at St Marks Park from 10-11.30am.

The Under 11s rounded their season off in style with a 3-1 home victory against fourth placed Manor Youth.

The Dragons had plenty of chances to score before finally finding the back of the net midway through the second half. Manor Youth soon equalised via a fantastic solo goal, meaning the Dragons took the 1-1 in to half time.

The Dragons were much better in the second half and Ollie completed yet another hat trick to settle a tense game.

The Dragons finish the season having won all of their league games.

Man of the match: Ollie.

Kensington Dragons beat St Joseph’s B 6-0 at St. Mark’s Park. The Dragons opened the scoring via a deflected effort from Jude from a corner, before an incisive move made it 2, with Stefano slotting in Ollie’s cross.

The Dragons took this two goal cushion in to half time, with the goalkeeper untroubled once again. Ollie added another brace to his mounting tally, Neon scored following a mazy run and Sam also got on the scoresheet. But for sloppy finishing in the final third, this could and should have ended in double figures.

A lot of these boys have the potential to go a long way- the future looks bright for the Dragons!

The Under 11s had a packed schedule this weekend with three fixtures, including a double header away at second placed Pitshanger A.

The Dragons played Brentham Colts at St. Mark’s Park on Saturday, running out 5-0 winners. The Dragons took a 1-0 lead into half time thanks to another strike from the consistently excellent Ollie. Five minutes into the second half his replacement, Norman, showed fantastic composure to poke home a one on one with his weaker foot. From there on in, the Dragons dominated, with Sam’s perfectly timed run found by an excellent through ball by man of the match Miguel, who ended with two assists, dominating the midfield. Franky capped a fine performance with a goal too, whilst Ollie finished with a brace and has probably scored more goals individually than entire opposition teams in the division.

Sunday’s games were of massive importance to the Dragons- positive results in these games would see us leapfrog Pitshanger and all but seal promotion. To the delight of coach and supporters alike, the Dragons were victorious in both games, keeping two more clean sheets in the process. The first game ended 1-0 and was one of the most difficult games the Dragons have played this season. Thanks to a fantastic Ollie goal from yet another Georgie assist, the Dragons took a 1-0 lead into half time. In truth, the Dragons squandered some fantastic opportunities to extend their lead, but a fantastic team performance meant the result was never in doubt, despite the quality of opposition. Cousins Tom and Jude were awarded joint man of the match as they excelled in defence

The Dragons utilised their superior squad numbers in the second game and ran Pitshanger off the park, triumphing 4-0 in the end. In truth, it could have been a much wider margin of victory, but the Dragons chose to experiment with positions and formations. Ollie effectively killed the game in the first half with another fantastic brace, earning him another man of the match. Franky arrowed a fantastic strike into the bottom corner in the second half, before Hussain scored his second of the season with a fine left-footed finish

Having conceded 3 league goals in 11 matches, the Dragons came from behind to be crowned division champions with 4 games to spare. A fantastic all round performance on both days. A real pleasure to watch.

Kensington Dragons travelled to Harrow St. Mary’s away, winning 2-0. The scoreline probably flattered the home side, with the Dragons dominating an enthusiastic opposition.

Ollie scored yet another goal after being set up by Georgie, before Stefano converted in the second half from a Georgie corner.

Man of the match was Miguel for a tenacious performance in holding midfield and right back, but Georgie was a narrow second.

Kensington Dragons under 11s made it six league wins out of six with a 3-0 victory over league leaders Vinceramos at St. Mark’s Park.

Despite being bathed in glorious sunshine, the quality of football did not match the weather. It was a scrappy game and, fittingly, Dragons took the lead via an own goal from a corner.

However, three minutes later Dragons conceded a sloppy penalty. However, the weak effort was saved and the Dragons finished the half with a 1-0 lead.

The boys seemed to have woken up from their first half doze in the second half and began to pressurize high up the pitch. They extended their lead with a header from another corner, before in form striker Ollie bagged another goal, effectively killing the game.

The age old adage that ‘the sign of a good team is that they win when not playing well’ gives some solace, but the Dragons have some very tricky fixtures coming up, and will need to improve their performances if they are to maintain the 100% record and become division 5 champions.

Following three months of no games, the Dragons returned to winning ways with a 4-2 away victory at St. Joseph’s B.
The Dragons took an early two goal lead, as Ollie raced through, showing great composure in his finishes. The opportunity to kill the game in the first half arose, but Dragons took a 2-1 lead in at half time, after squandering a few guilt-edged chances, before conceding a scrappy goal as the Dragons failed to clear their lines.

Starting brightly in the second half, the two goal cushion was restored as Ollie completed yet another hat-trick with a blistering shot into the top corner. However, the Dragons conceded yet another sloppy goal- the first time they have conceded more than once in a league game to set up a tense finale.

Ten minutes from time, after the Dragons again had missed opportunities to score, Ollie squared the ball for Sam to tap into an empty net (showing his team mates how it’s done!).

Considering they have trained twice since Christmas, this was a satisfying three points.