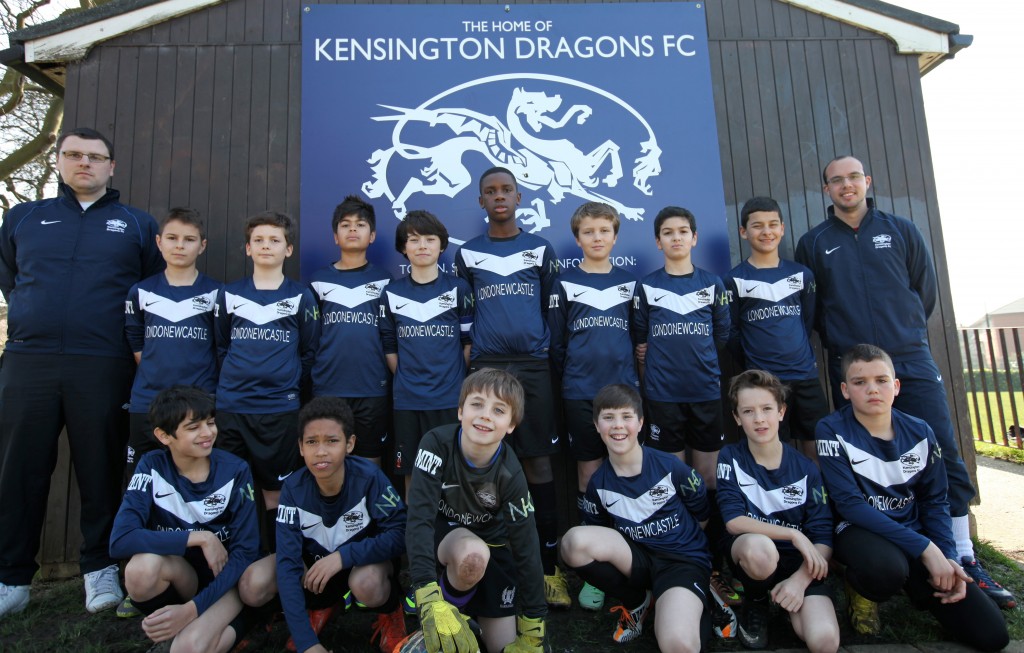 There was an away match in the cup in Halloween week for the under 13s and they started off by handing out treats in the form of goals to their opponents, Hanwell Town.

The team in black and white stripes were 2 nil up in the space of 3 minutes (one from a dubious penalty) as the rain came down and the ball skidded across the greasy playing surface. The Dragons were defending too deeply, wary of the home team’s striker’s pace and propensity to fall over and this was looking like it might prove costly.

We started to think that this might turn into a horror show of Texas Chainsaw Massacre proportions but the goals jolted the Dragons into life like Frankenstein’s monster. They jerkily started to go through the gears. Milo was introduced to the midfield in a holding role and he had an immediate impact with his enthusiastic work rate, energy and willingness to track back and selflessly help out his defenders.

The visitors got a foothold in the match when Waleed slotted home under the keeper with familiar composure before the home team replied with another goal of their own to make it 3-1 after just 6 minutes of play. There now followed a period of attrition with the teams looking pretty evenly matched despite Hanwell being a division above the Dragons. Joe fizzed an angled effort narrowly past the post from the left. A few minutes later Ilya cut inside from the right but couldn’t find the finish to match his quality approach play. And that’s how it remained at the break.

The Dragons emerged from the half time team talk (or whisper, as coach Dean had lost his voice) wearing bright orange bibs. Not because they were still in the Halloween spirit but because the home team were finding it difficult telling who was on their team.

Waleed started the second half where he had left off the first and curled a delightful shot past the keeper for his and the Dragon’s second. 3-2, the Dragons were still in this. Unfortunately the home side weren’t being obliging hosts and they netted again before Joe carved his way down the right like a knife through a pumpkin and delivered a devilish cross that Waleed (who else?) met with the perfect header to complete his hat trick (which if I’m not mistaken was one with his left, one with his right and one with his head, a perfect treble). 4-3. Could a cup upset be on the cards? Sadly not, as in the dying minutes Hanwell sent a speculative shot in on goal and the wet ball slipped through Enrique’s fingers to give the home team a winning margin that was rather more flattering than they deserved.

Again the Dragons were made to pay for a sluggish start but there were plenty of positives to take out of this battling performance. Least of all that in Waleed, we have a striker who can score goals against any team. And if you have that you always stand a chance and you should fear no-one. Even in Halloween week.