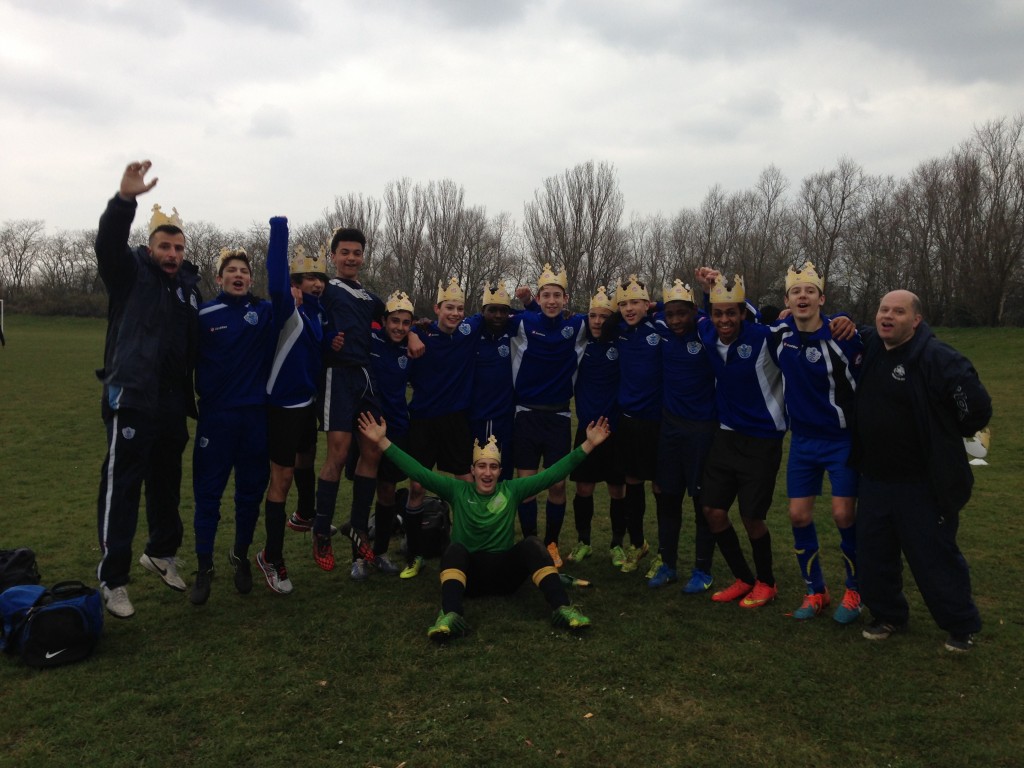 It was quite apt for us to be playing Yeading Wanderers where we knew a win would clinch the Division as 4 seasons ago we played our first ever game against them as an U12s team. Over the years we seem never to have the rub of the green against them and team wise Mother’s day took its toll on the squad and we only took 13 players to the game. So we knew this would not be a walkover.

Yeading packed their defence early in the game with 8/9 men behind the ball which meant the early exchanges were tight but we eventually scored a freak goal as Dean took a free kick from the half way line which bounced inside YW’s penalty box and their keeper misjudged the bounce and the ball went over his head and nestled into the back of the net. We nearly doubled our lead as Bailey collected the ball on the edge of the area swivelled and hit a shot that looked destined for the top left hand corner of the goal until their keeper pulled off a great save. Then Armand fizzed in a shot from 25 yards out that went narrowly wide.

A goal mouth scramble saw the Dragons hit the bar 3 times with shots raining in on the Yeading net and our second goal was from a long clearance which a defender tried to flick back to their keeper Emmanuel anticipated this and got there before the keeper to slot the ball into the net. Another defensive mistake led to our third as a defender passed the ball to Korey inside the Yeading area who drove the ball into the bottom off the net. The YW bar was again rattled another couple of times this time from shots from Emmanuel and yet again from Armand to complete his hat trick of bar hits.

The icing on the cake was a superb headed goal from Pablo from a Bailey corner which crashed against the underside of the bar into the Yeading net to secure another victory which secured the Division title for the team. The final whistle was met with the obligatory champagne shower (well sparkling apple juice) and a team photo featuring crowns from a well know burger establishment. A much deserved reward for all the efforts Dean the Coach, Rob the Manager and players and parents have put in this season. Well done everyone!!